Some friends invited us to dinner on December 27th.  What are they, crazy?  Of course I said no.  I have to get this Christmas Crap out of my house!  Like, right now!

From November until December 25th, it’s a wild love affair with Christmas: parties and presents and cookies. December 26th, things start to cool off and then BAM! December 27th hits and it’s over. Get outta my house, Christmas!  Make way for the birthdays!

Darling Husband’s birthday is today and mine is tomorrow.

Switching a house from Christmas back to Non-Christmas is a horror show when your house is teeny, tiny.  Look:

The switch-over got done in time (sigh of relief) and we took Darling Husband to see The Hobbit for his birthday today.  He isn’t talking much about it and I think he didn’t much like it.  He’s a stickler for the book version and all he could blurt out was, “They took liberties!  By gum, they took liberties!”  I’m thinking this was a Bad Thing.  He didn’t look happy.

On the way home Darling Husband could not figure out what he wanted for dinner. He was still mourning all those liberties, you know. We ended up getting Royal Farms fried chicken and eating it on trays in front of the TV.  Chicken from a gas station on a tv tray and a movie that takes liberties on your birthday. Well, better luck next year.  It can’t be giant laser tag parties every year.

I am an utter hypocrite.

So there I was sitting at the kitchen table reading my HGTV magazine and there was an article about some guy’s vacation home (envy), and in every room he has orange. Orange curtains or orange pillows or orange vases or whatever.

And I thought, “Ewwww! Orange? Why? So garish.”

I finished that issue and picked up the next.  This time there was an article with someone’s mudroom (envy) and it was painted orange.

Ewwww! Orange? Why? So ugly.

And another article further in showed a kitchen island painted, you got it, orange.

Ewwww! Orange? Why? So jarring. Why would anyone want orange all over their house??

And then I looked up.

I am so ridiculous.  Because this is my kitchen.  See: 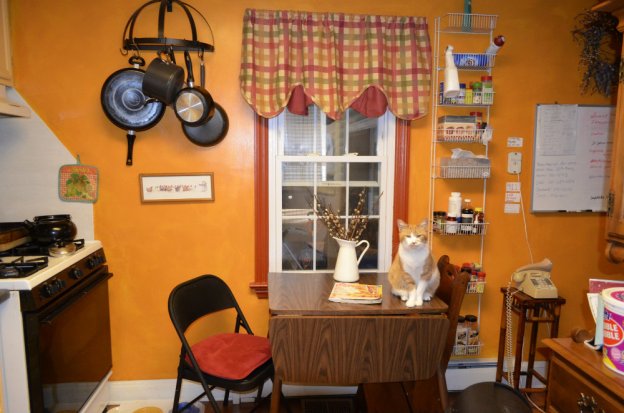 Sigh.  People are just ridiculous.  All of us.  Including me.

So I was at Karen’s house today.

“Who is Karen?” you are wondering. “The Lizard has never talked about Karen.”

That’s because I don’t know Karen very well.  She goes to my church and we became Facebook friends, but other than a “Hi Karen,” “Hi Jackie” at church, we’ve not talked much.

Walked to the front of the house and peeked inside the glass door to see a hallway brimming with woodwork.  There was an old staircase with built in bookcases at the top and a hardwood hallway with rooms coming off the sides.   Oh, rapture.  It was a Gorgeous Old Home (GOH) and not one of those nasty UNHs.  (Ugly New House.)

This was going to be a problem.  See, I don’t know Karen very well and it would have been nice to give her some sort of eye contact.  But that was impossible under the circumstances.  I tried, I really tried, but in the end I succumbed to gawking at the house and wiping drool off my chin.

Take a look at her potato masher.

That’s a great potato masher, isn’t it?  It has a right angle to it.  Perfect for nabbing things off of too-high shelves.  Unless you also nab your mugs which break in the fall.  See those green mugs?  They’re grieving the loss of their brother cups who didn’t make it.

Karen said, “We have some old cameras if you want to take their picture.”  Did they ever have old cameras.  Fifteen or so gorgeous old timey cameras. I love old timey stuff.  I could wander around in antique stores for days, sleeping on the rope beds at night and living off of the dust on the books.  Almost like in From the Mixed-Up Files of Mrs. Basil E. Frankweiler.

And speaking of dust, see this picture?

Pretty boring, huh?  There’s nothing of interest for your eye to fall on, so it wanders around the picture and gets bored.

But if you crop and darken the darks a bit, your eye has something to look at.  And see how the dust on the camera really stands out. 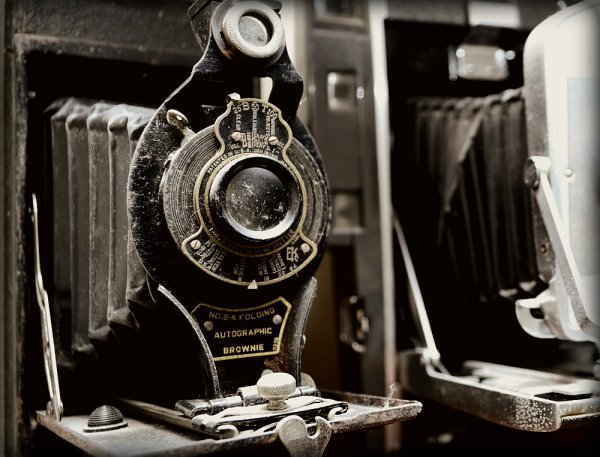 Isn’t that some awesome dust?  Doesn’t it just make the picture so much better?  It gives you a sense of age. Karen was a good sport that I took pictures of her dust.  Dust adds character to GOHs.  A little bit of dust is healthy.

And speaking of Basil, she has a little dog named Basil.  I wondered, “Basil Fawlty?”  Yup.

I’m not particularly a dog person, but her little dog was very sweet.  Let’s have fun with before and after pictures of Basil.

Note the distracting paper on the couch across the room that looks like it’s coming out of Basil’s muzzle. And the coupons on the table.  And my knee.

Gone!  And colors made richer.

Poor little guy is going bald.  I really like his holey sweater.  It adds lots of texture.

Unedited of a close up of Basil at a very slightly different angle:

Edited–removed that thing by his muzzle again and again, made the colors richer.  When I made the darks dark, the pillow on the couch disappeared into the shadows.  Now Basil is the complete focus of the picture.  I like the pink of the blanket across the room from him, though.  Adds just a little bit of interest, but not enough to distract from Basil.

Basil sat on my lap through the entire lesson and I do have to say, I wish they’d stop feeding that poor dog beans.