I know some people who recently opened a restaurant in Hanover, PA.  The restaurant is called The Hub.  They serve burgers and wraps.

Unfortunately, they opened when the exchange students were here and we spent entirely too much money.  We didn’t want the students to get a bad impression of Americans.  There we were, feeding them tomatoes and corn (“Only poor people eat tomatoes and corn in China”), so we had to put on a good show and…turn on the lights.  Ugh!  There were, like, 4 light-fixtures on at the same time each evening.  For hours.  It was making me twitchy.

In fact, we often (often) use the light from our ipads to maneuver around the house at night, like carrying a candle in the olden days.  Did you know that it costs only $1.36 to charge an ipad…for a year?!  I’ll repeat it:  It costs a buck 36 to charge an ipad for a year!  A year, people!  I am not kidding.  Here’s the link.   Providing electricity for four blazing light fixtures costs way more than a buck 36.

And it wasn’t just the blazing lights–we had to feed the students food, take them laser tagging, take them to Li’s Buffet, buy them Nerf guns.  The list goes on and on.

So, we didn’t go to The Hub when it first opened.  We wanted to save up some money for a bit.

But I finally got to go tonight.  Remember my Soup friends?  I used to meet with a group of women every other week for lunch.  We always ate soup.  We don’t meet as much anymore–only every other month or so, so we missed two birthdays.  We arranged to meet this evening at The Hub to celebrate the birthdays we missed.

There we were at The Hub, being cackling 30/40 year-old women and talking entirely too loudly.  After we had dinner, it was time to sing Happy Birthday.  Now, as you all may recall, when my family sings Happy Birthday, they sound like those dying giraffes I’ve told you about.  But since there was no family around, I had a chance to sing it normally.  And loudly.  Oh, I wasn’t the only one.  They were all belting it out.  Nice and loud and…on key.  Yes!  On key!  And when we got to the last “Happy Birthday to you”  three of the women in my party broke into a perfect three-part harmony.  A three-part harmony!  I’m telling you, other patrons in the restaurant had to dab the tears from their eyes, it was just that beautiful.  That’s what happens when you sing Happy Birthday with three members of the church choir.  Choir people sing loud and proud, on key, and in harmony.  I’m hiring them to come to the next Lizard family birthday party.

And now, the food:  Oh yum–it was delicious.  They have some sort of seasoned fries with some of the seasoning at the bottom of the basket so you can roll your fries around in it.  Or, you could get chips instead.  I was imagining a bag of nasty old chips, which is why I went with the fries, but no.  No!  Not at The Hub.  At The Hub, you get homemade hand cooked chips.  Mmm.

And don’t forget the friendly service.  I got a few pictures of Joy.  Here’s one: 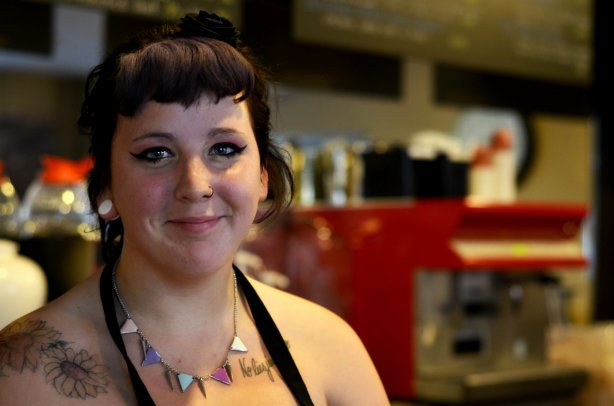 I love her look.  I plan on going back to The Hub when there’s better light in the windows and taking more pictures of her.  While I eat chips.  Those were some good chips.  Joy was polite about me taking pictures of her.  I forget that people aren’t used to having their pictures taken with big ol’ cameras.  Cell phones, yes.  Big ol’ cameras, no.  But she managed to ring up my bill, even with all the whirring and clicking of the camera directed her way.  A true professional.

After eating, we hung about for a bit on the sidewalk saying our good-byes when a friend of ours passed by in his mini-van.  He rolled down a window to holler out a friendly insult.  I missed exactly what he said, but it was something about being hooligans on the street corners, or some such thing.  Now, that’s not a very exciting story to tell you, until you get to the part where one of my friends didn’t recognize him and was getting increasingly upset.  “Oh, that’s just disgusting!” “Oh, seriously?!”  “I just…splutter…splutter…!”   She was on the verge of hurling insults his way when the light changed and he drove off.

So, there you have it:  ipads are a cheap source of light, bring a choir with you when you sing Happy Birthday, the food at The Hub is yummy, and Tim was not trying to pick up a group of cackling women while driving around Hanover, PA in his minivan.