Though we like the idea of homeschooling while cuddled on the couch, Boy7 has been getting increasingly wiggly over the past few months. There we are sitting on the couch, nestled in our blankets, huddled over a math book when I turn away to pick up a pencil and boom!, the child is sitting on his head with his feet waving in the air and I’m in danger of being kicked in the teeth.  Enough is enough.  I brought up a school desk from the basement today.

Thankfully, seven year olds are curious little creatures and the idea of sitting at a school desk is a novel one, so the transition was easy.  He happily sat at his kid-sized school desk and doodled all over his math page.

I’ve decided to officially start teaching the boys Home Economics beginning with laundry and dishwashing.  If Bedouin children can care for an entire flock of goats by the age of 3, surely my kids can figure out how to spin the dial on the washing machine.  It’s not like in the olden days when their arms would be ripped off in the squeezing dryer thingee.

I was inspired to begin the training early after listening to my Soup Day friends groan over how difficult it is to teach their teenagers how to do things around the house.  If I start now, before the children are bigger than me, I can still stifle a revolt by pinning the child to the ground and tickling him until he says uncle.

My Soup Day friends had me a little nervous about teaching Home Ec.  Gee would I even be able to teach my kids?  And then this morning it hit me: I homeschool the kids.  I homeschool the kids!  Duh!! I’ve taught them every single thing they know.  For good or ill, it’s all on me, and has been all along.

Yes, teaching children is probably one of the most frustrating tasks of my life, but I’m so numbed to it by now that teaching Home Ec should be just one more frustration in an already frustrating day.  If teaching them to read, which was pure agony, didn’t kill me than nothing will.

Speaking of frustrating, today had its moments.

I headed off to Gettysburg library for some art books I’ll need for Friday’s co-op.  After the library I was going to get my grocery shopping done.  And yes, it snowed today.  It was a freak snow squall that lasted only about 5 minutes, but I promise you, when I say that it rains, sleets or snows every grocery shopping day, I’m telling you the truth.

Anyway, I didn’t want to drive from Gettysburg to Hanover to do my grocery shopping, so for the first time ever, I decided to go to Giant in Gettysburg.

As I’m driving along, I can’t help but notice that the weird weather has made some gorgeous shadows on the landscapes around me.  There’s an odd mixture of threatening black storm clouds and big puffy white cottony clouds and large patches of sunlight on everything.  Very moody.  The battlefield with its canons and monuments looked spectacular.

I was very tempted to take pictures, but no.  Need to stay on task: library, grocery shop.

Couldn’t park in the library parking lot because only the compact car spots were left.  Couldn’t find my library book because the librarians are crafty.  They don’t want to be out of jobs, so they hide the good books from the customers so you’re forced to ask for help finding them.  Then they roll their eyes at you and lead you to the trap door under the water fountain where they keep the oversized art books, and shake their heads at you for not figuring this out on your own.  Theirs is a reign of intimidation.

Dealt with those mild frustrations and then drove to Giant, considering whether I should stop for pictures or not….no….gotta get the shopping done.

This Giant is a foreign store, so I had to wander far and wide to find the things I wanted.  Got to the allergy medicine aisle and I could not find the Nasalcrom.  But I knew it was there.  Gerhard said there were five boxes of the stuff not an hour ago.  Where’s the blasted Nasalcrom?  I stared and stared and looked and looked and was seriously on the verge of throwing a weeping fit…when I found it.  Which makes me wonder if it was in all the other stores, too and I just couldn’t find it.

Wrong.  I think my 7 year old Home Ec students could have done better than I did.  I’m not sure if there were instructions posted anywhere or if it was pure baptism by fire, but it took me a good 3 bags to figure out that when you bag your items, the bagging shelf is a little scale, and if it doesn’t feel the weight of your items going into the bag, the machine gets panicky and won’t let you check out anything else.

By the time I figured out what was wrong, it was too late and the machine was pouting in a corner, refusing to cooperate.  I stood there making a fool of myself by alternately pleading with the machine and raging against it, “But I did bag it!  I did!  How about the  mushrooms…please just let me ring up the mushrooms!” and putting the bags on and off of the scale hoping to coax the machine into ringing me up. *

Finally got it all done and headed home.  The sky and the lights were still beautiful, and I couldn’t resist any longer.  Even though there was milk in the car, I turned down a road I’ve never been on and took pictures of a graveyard.  I had about 10 minutes to play before the sun went behind clouds for the rest of the day. 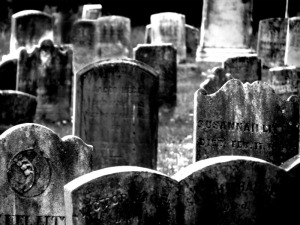 * Yes, I do get the irony that I scoffed at inept self-check-out people, then ended up being just as inept as everyone else.  And now I’m heading down that same path by assuming my homeschooling status will help me teach my kids Home Ec better than my Soup Day friends.  I’m sure I’ll soon be issuing an official apology for blithely ignoring their warnings.